@zomer
thanks for the video! xD so hilarious! it's very clear. you did that right? can't thank you enough ^^ lol hybrid OR eh? i kinda like the way it sounds. 8D

O2 is fine. JE boys perform more songs than others do is common knowledge i guess =_= i'm feeling like peeling their skin off... anyone's gonna lend me a hand on it? xD

*lends both of her hands to monn-chan

BlackMonn wrote:
i'm feeling like peeling their skin off...

WHY'D JOO HAVE A RAMBO KNIFE??

Coz i'm a highly trained commando!! U guys shouldn't mess with me.... LOL XD

and u r actually the hidden forumer???
u're online nao and yet, i didn't see joor name *pinches and pulls fathi*

Anytime you guys. I haven't been uploading as much as I did on veoh, but I'll try my best to put more up on YT and if there are requests for original files, just let me know. I'll try to work on that too or request at the other thread;).

yaya, I was surprised too! I had to rewind a few times LOL.

Fathi, yeah I also thought I recognised Hiroki's mole on that "hybrid OR guy", but I thought it was a coincidence.

orangejuice, I thought the hybrid OR guy got lost when he was doing an audition or a bollywood movie, LOL.

Raku-chan, they are such jokers. I wonder where they are hidden on the Ura Shopping cover

BlackMonn, hands and feet for you haha. Yeah, I added &fmt=18 for higher YT quality (behind the yt link). Sometimes the link "watch in high quality" is available, but sometimes it doesn't. I think it is a weird glitch. But it can be helped with that code.

^i see thanks xD

random : thirty5-san made a winter-ish avatar of naoto xD i know she likes him too much to resist.

edit : has anyone been paying attention to the oshare banchou photo contest and posted the winners here? i'm sorry if this has been done before but... http://www.sonymusic.co.jp/Music/Info/orangerange/banchou/ <-top 3 winners i think =]

random : thirty5-san made a winter-ish avatar of naoto xD i know she likes him too much to resist.

the gif made by her ish cute*_*

yeah no theme xD applicants simply had to send a picture of "oshare banchou" that they know. =]

zomer wrote:I thought the hybrid OR guy got lost when he was doing an audition or a bollywood movie, LOL.

o.O oooh does that mean that the OR members have potential in the bollywood industry?? XD I'm imagining it right now lol

that grannie is superb!! hahaha...
but the santa is.... *speechless*

Shinrei, do u remember that baka santas below...?? LOL
Now, i know...Hiroki really 'loves' santa. Hahahaha!!!

Fathishino wrote:I got so much free time yesterday but hd nothing 2 do. So, i just tracked back their pics in Radio Contact. So, guess what i've found? Hehe!! 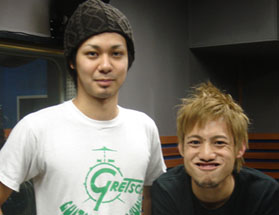 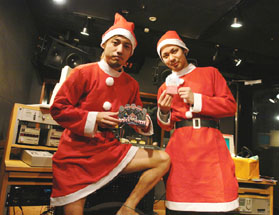 I dedicate this one specially 2 Shinrei-chan. Enjoy yourself!! ROTFLMAO!! 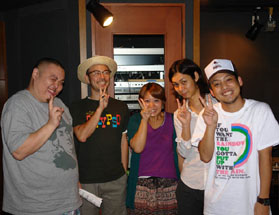 heheheeeee... yea, seems he loves santa so much... 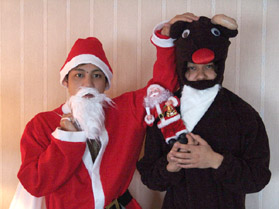 Where are your pants hiroki? nice legs... XD
wonder if he's naked under there... perv santa. 0.o

the suit doesn't have pants since it belongs to Mrs.Claus XDD

Hiroki = Mrs. Claus = with black beard (instead of white like Mr. Claus)..

hmm..didn't know hiroki was into that kind of things.
looks like naoto likes mrs. claus clothes as well...I'm not sure what I think about that..well, pantless naoto can't go wrong anyway. XDDDD